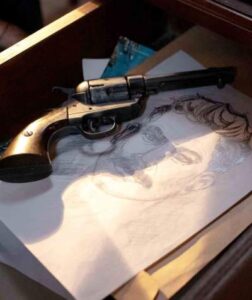 In the previous episode we saw that the co-op is hit by yet another blow. Nestor makes an important discovery about Kypraios, after he is visited by an old comrade-in-arms. Nikiforos’ plans to stop the creation of the industrial zone are in danger of falling apart, because Dukas finds out what he has been up to. Lambros insists on divorcing, bringing Theodosia to her limits. As a result, when she accidentally meets with Eleni, blood is shed…

Badly wounded by her fall from the cliff, Eleni unexpectedly confronts someone. Nestoras begins to suspect that the man in the sketch of his son’s killer is Kypraios. Asimina tells Droso that she saw her with Iordanis, and Droso promises to stop seeing him. Kypraios and Fanouris find the semi-conscious Eleni and carry her to the village.

In an effort to persuade Pinelopi to stay with him, Kleomenis reveals that the man who stabbed Miltiadis was Meletis. Everyone is doing their best to make Eleni recover, but tensions grow between Lambros and Kypraios. Eleni is left alone with Theodosia, and they both take their masks of politeness off their face…