In the previous episode we saw that in an effort to persuade Pinelopi to stay with him, Kleomenis reveals that the man who stabbed Miltiadis was Meletis. Everyone is doing their best to make Eleni recover, but tensions grow between Lambros and Kypraios. Eleni is left alone with Theodosia, and they both take their masks of politeness off their face… 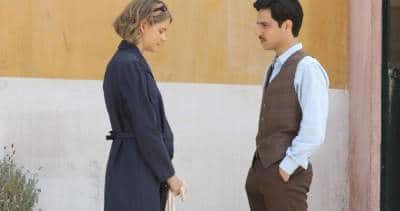 Theodosia admits to Eleni that she deliberately did not help her when she fell off the cliff. She accuses her of being the cause of all her misery. Iordanis tells Droso that he is in lοve with her. Asimina however finds him and tells him to keep away from her sister. Nikiforos travels to Athens, supposedly to see agricultural machines, and meets someone who also opposes the industrial zone.

After a quarrel between Lambros and Kypraios, Eleni maintains a neutral attitude. Kypraios feels betrayed and angrily leaves. Pinelopi insists that Meletis tells her if he is responsible for Giannos’ death. Theodosia realizes that she dropped the gold crucifix she was wearing at the spot that Eleni fell off the cliff, and goes to search for it. By doing this however, she risks the possibility of having her secret revealed…