In the previous episode we saw that after Eleni’s abrupt change of attitude towards Kypraios, their relationship seems to be coming to an end. Theodosia arranges a meeting with her lawyers for the divorce, and Lambros faces an unpleasant surprise. Eleni is in court,trying to save her land, but things are not looking good for her. After being warned off in his meeting with Asimina, Iordanis tries to make Droso reveal her secret to him, and is successful.. 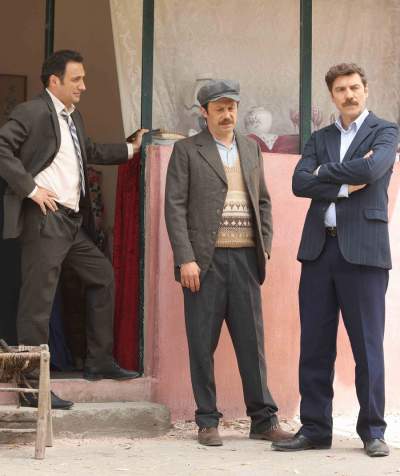 Dukas is once more victorious in the battle for the industrial zone. The court decides in favor of the expropriation, and Eleni loses her house and land. Miltiadis and Nikiforos race to stop Doukas’ plans, with the information they have in their hands. The bad news for Eleni however continue, when the farmers decide to stop the operation of their Co-op. Theodosia stretches things to breaking point, refusing to divorce Lambros. Annette announces to Dukas that she agrees to return to Paris, only if he can convince Meletis to go with her…

Pinelopi and Meletis decide to steal money from Dukas and run away. Will Meletis’ plan succeed or will he be caught? A court notice brings Eleni before her worst fears. Iordanis makes his appearance with a proposition for Droso and Eleni that proves to be the final blow to the relationship of the three sisters …