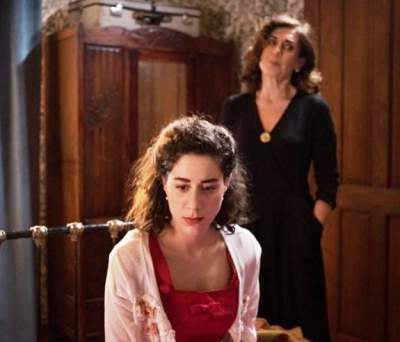 In the previous episode we saw that Myrsini makes one last desperate effort to help her son, and keep Droso’s child with them. To do this, she speaks to Droso herself…Prousalis informs Nestor that something bad has ha

ppened to someone he knows well.

Miltiadis makes a surprise offer to Eleni. Two women visit Asimina, and their coming may change her life forever.

Eleni is appointed president of the village Co-op, causing much annoyance to Theodosia. Asimina is furious with Droso, because she agreed to follow Myrsini’s plan about her baby. Myrsini however is not to be easily deterred. Nestor is in shock beacause his friend Sarantis Georgalas has disappeared, and tries to find out what has happened to him. Kypraios worries that his atrocious deeds may come to light.

Anet understands that there is something deeper between Pinelopi and Meletis. Meletis reveals Kleomenis’ guilty secret to Konstantis. Theodosia makes a bold and risky decision about herself and her marriage. Miltiadis is astounded by something Eleni tells him. Asimina returns to the Sevastos house, bringing joyful news which will change the family’s life. Will Nikiforos also find these news joyful?