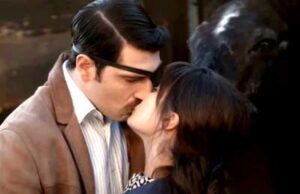 In the previous episode, the members of the Cooperative finally realise what Nikiforos’ real intentions are, when he brushes  their objections aside and signs the agreement. The news that Doukas and Myrsini are divorcing shocks the Sevastos house. Doukas persists with his decision and everyone tries to find out why. Eleni reveals to everyone in the village what Voskaris had done to her when she was imprisoned.Voskaris finds all the villagers against him, and desperately seeks a way out.

Voskaris watches the trap close around him. Will he manage to escape the prosecutor once again? Asimina suspects that Droso is having an affair, and decides to discover who her sister is with. When Droso finally reveals the man’s name to her, Asimina is shocked. Annette discovers that Sokratis is still doing business with Dukas, and decides to clear things out.

The day that the members of the Cooperative will sign the agreement with Ignatiadis has come. Will Dukas see his plan to become the lord of the valley be crowned with success? Miltiadis makes a desperate attempt to free himself from Giannos’ ghost, and start a new life with Violeta. Myrsini is found unconscious, causing a great turmoil in the Sevastos family.