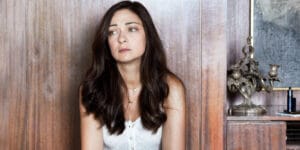 In the previous episode of the Alpha tv series, George sees Aliki and Fotis together and realises that something curious is happening. He decides to go through all of the cases that Fotis had handled for the police in the past. Dimitris reveals to a shocked Andy that he is Anna’s son…Apostolis confesses to Christos that many years back he had killed Stavros’ brother in the village.Elektra tells Christos that Andy knows about Dimitris. Christos finds Nikos ans Irini and informs them about what he has heard. Two months before the accident, we see Konstantinos giving two plane tickets for Argentine to Anna …

In today’s episode Konstantinos arrives outside Legatos’ home. He demands explanations about his past with Anna, when he is suddenly sees Sophia is in the house. Nikos refusal to talk about Dimitris causes a fight between him and Irini.

After the discovery of Penny’s corpse, Giorgos summons Legatos to the police station. Olga warns Konstantinos to stop searching for Anna because it is too dangerous. Legatos congratulates Anna for having killed Penny, showing her the news announcement about the murder…

Click HERE to watch the video after 23.00 Athens time on Wednesday