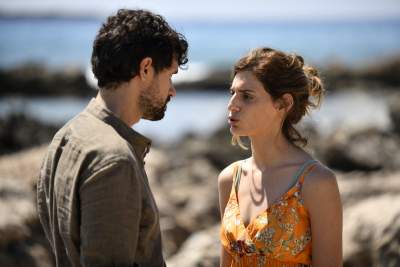 In the previous episode, Vasiliki, Mathios and Asteris are upset because Nikiforos openly backs Kalliopi and her views about what should be done done with the farmlands. Nikiforos is forced to reveal her plans in order to justify himself and appease the three of them .

The final decision about the future of the land is now in the hands of Argyro. An outraged Pavlos is out for blood, and lurks outside the Stamatakis mansion. As he waits however, he realizes that a new threat has appeared, and that everyone is in grave danger…

The outburst fo the fire divides the villagers into two opposing sides. Nikiforos quarrels with everyone, being certain that Pavlos is the culprit. On the other hand, Asteris tries to calm things down, not knowing that Argyro will make a move that stuns everybody, and blow up everything he had until then taken for granted. Stavros threatens Asteris and KalliopI must now decide how to face this. Aimilia is worried because Pavlos must enter the hospital, while Lefteris decides to punish Panos…