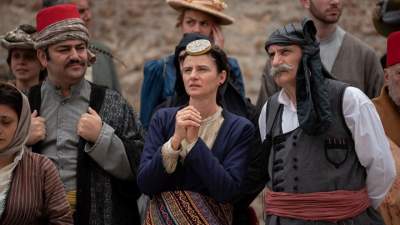 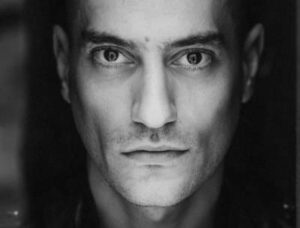 To kokkino potami episode 17 (Red river). Live stream and Video of the Open Beyond TV channel series. Scheduled online for 26/1/2020 at 21.00 Athens time.

In the previous episode we saw that the Turks order the christian citizens of Amissos to leave town, stating that it is nothing permanent, and there is no need to carry their belongings with them… Next morning, all the Greeks gather at the town square preparing to depart. In everyone’s face, the agony for past life left behind is evident.

A huge caravan of Greeks leaves Amissos after having been ordered to evacuate the town. Packed in wagons, they leave their homeland behind, taking with them all the belongings they could carry. A violent clash follows when Turkish countrymen attack the procession. Many Greeks are killed and the Turks loot their belongings. Unseen in one of the wagons from some distance behind, Ifigeneia and Ali watch the raid in helpless horror, and witness the savage murder of a mother and her child.

Ifigeneia sees Vasiliki and Eugenia in the crowd and waves her hand to be seen, despite the danger of being detected. Back in Amissos,Turkish refugees and their families occupy the abandoned Greek houses. In Istanbul Kerem secretly visits Miltos, and informs him that Turkish refugees from Thrace have seized the houses in Amissos. His brother Themis has managed to escape and is hiding in the mountains.

Despite Kerem’s advice, Miltos cannot remain uninvolved. Turkish soldiers attack the caravan women, attempting to rαpe them. Amongst the women are Eugenia and Vasiliki. The Turks continue to execute anyone who offers resistance. In Amissos, Theoklitos is shocked upon finding Miltos in the church. He tells him of what has happened, and Miltos decides to seek and find the hiding Themis.